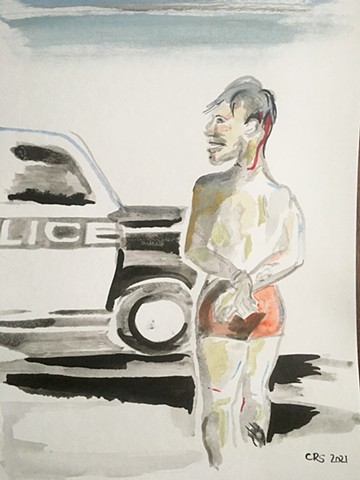 CW: cops, a scene of arrest, some blood. gardena, california. one possible symptom of mania being nice to cops.

the radio was playing "low life" by future and the weeknd

I was infiltrating a military training site like those described in The Counter-Counterinsurgency Manual by the Network of Concerned Anthropologists, places where soldiers practiced "pacifying" actors.

I love drawing as a means to picture unrecorded moments/or moments only recorded in bodycam or surveillance cameras.

I was arrested in Gardena, California for "prowling" which I was later told was a "you don't wanna see her" offense/reserved for messy crazy women on the street.

during the many court dates that dragged me back to Gardena from my home in San Francisco, "the people" threatened to show surveillance footage of me "prowling."

I had a morbid curiosity about the video footage, but thankfully the case was dismissed before the prosecution could showcase my madness in court.

the head injury depicted was not from the cops, for the record. it was, however, evidence that led to arrest/psychiatric lockup "for my own good."

don't call the cops on people in psychiatric distress.